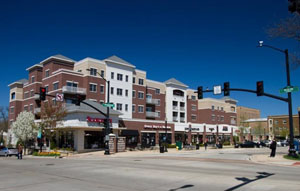 The Village of Downers Grove, Illinois is located 22 miles west of Chicago and has a population of 48,867. Downers Grove has also been recognized by Forbes as one of America’s Friendliest Towns. And it’s highly ranked schools was a top factor in Downers Grove being named one of the Top 10 Livable Cities for Kids and Top 100 Places to Live by Livability.com.

With convenient access to Chicago via Metra rail service and several major expressways including 1-88, I-355, 1-55, I-294, and I-290, this makes Downers Grove a prime location to live. Several major corporations have business operations in Downers Grove including Advocate Health Care, Dover Corporation, Pepperidge Farm, DeVry, Inc. and Sanford, maker of Sharpie and Paper Mate.

Downers Grove prides itself on the presence of about 25 Sears-Roebuck Catalog Homes, built between 1908 and 1940. Today, Downers Grove is one of the largest communities in the Chicago area that is tearing down old homes and rebuilding much larger new homes.

Avery Coonley School is a private K-8 school, known for its math and science-oriented teaching as well as its focus on the arts and foreign language.

Downers Grove is also the home of Midwestern University.

According to the American Community Survey, Downers Grove is one of the nation’s most educated communities. Approximately 60% of the residents over the age of 25 hold a bachelor’s or advanced degree; the national average is 27.9%.

The Downers Grove Public Library is known as one of the best in the region. In 2014, the 67,738 square foot library underwent a renovation to add more study spaces, upgraded technology, improved WiFi, enhanced display of items, and added a cafe.

For additional information about Downers Grove, please visit their website at http://www.downers.us/

Reviews on Zillow
3854178
“Lisa Wenzel was recommended to us by a friend of a friend. I cannot state enough how glad I am that we chose Lisa to help us find our first home. She … more “

5.0/5.0
by emilydanae09
3177132
“Our mother passed away and Lisa handled the sale of her property. She and her husband did everything needed to sell the property quickly at our price. … more “